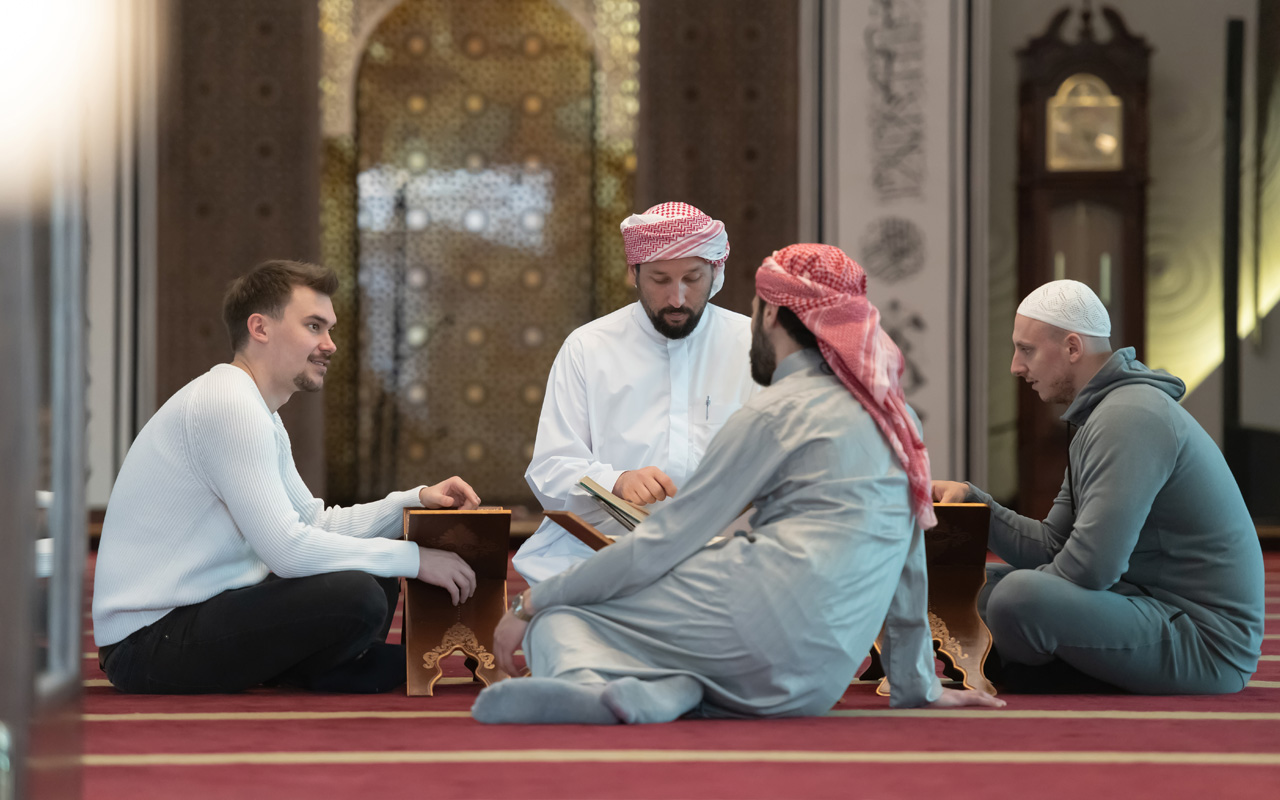 Further ReadingVirtues of Remembrance of Allaah

The Excellence of Gathering in which Allah is Remembered

“And keep yourself (O Muhammad (sallallaahu alayhi wa sallam)) patiently with those who call on their Rubb (i.e., your companions who remember their Rubb with glorification, praising in prayers, and other righteous deeds) morning and afternoon, seeking His Face; and let not your eyes overlook them.” (18:28)

1447. Abu Hurairah (May Allah be pleased with him) reported: The Messenger of Allah (sallallaahu alayhi wa sallam) said, “Allah, the Exalted, has teams of angels who go about on the roads seeking those who remember Allah. When they find some people remembering Allah they call to one another and say, `Come to what you are looking for;’ and they surround them with their wings till the space between them and the lowest sky is fully covered. Allah, the Exalted and Glorious, asks them (although He is best informed about every thing): `What are my slave saying?’ They say: `They are glorifying Your Tasbih, Tahmid, Takbir, Tamjid, (i.e., they were declaring Your Perfectness, praising, remembering the Greatness and Majesty of Allah).’ He asks: `Have they seen Me?’ They reply, `No, indeed, they have not seen You.’ He asks: `How would they act if they were to see Me?’ Thereupon they reply: `If they were to see You, they would engage more earnestly in worshipping and glorifying You and would extol You more.’ He would say: `What do they beg of Me?’ They say, `They beg You for Your Jannah.’ Allah says, `Have they seen My Jannah?’ They say, `No, our Rubb.’ He says: `How would they act if they were to see My Jannah?’ They reply, `Were they to see it, they would more intensely eager for it.’ They (the angels) say, `They seek Your Protection.’ He asks, `Against what do they seek My Protection?’ They (the angels) say, `Our Rubb, from the fire of Hell.’ (He, the Rubb) says, `Have they seen the fire of Hell?’ They say, `No. By Your Honour, they have not seen it.’ He says: `How would they act if they were to see My Fire?’ They say: `If they were to see it, they would more earnest in being away from it and fearing it. They beg of Your forgiveness.’ He says: `I call you to witness that I hereby grant pardon to them and confer upon them what they ask for; and grant them protection against what they seek protection from.’ One of the angels says: `Our Rubb, there is amongst them such and such slave who does not belong to the assembly of those who are participating in Your remembrance. He passed by them and sat down with them.’ He says: `I also grant him pardon because they are the people by virtue of whom their associates will not be unfortunate‘.”
[Al-Bukhari and Muslim].

(The narration in Muslim is also the same with minor changes in wordings).

1448. Abu Hurairah and Abu Sa`id Al-Khudri (May Allah be pleased with them) reported: The Messenger of Allah (sallallaahu alayhi wa sallam) said, “When a group of people assemble for the remembrance of Allah, the angels surround them (with their wings), (Allah’s) mercy envelops them, Sakinah, or tranquillity descends upon them and Allah makes a mention of them before those who are near Him.”
[Muslim].